After making the mistake of deciding to go back home during the spring break of freshman year, I was never again tempted to spend $500 to return to Santa Ana for only a week. I expected to chill at my house, read books and binge on Game of Thrones, while also being able to spend some time with my parents. Instead, I returned to find that there were many people I felt internally pressured to see: my old English teacher, middle school best friends, and people that I’ve gotten close to during my years of work back in Santa Ana. Squeezed into a week rather than the longer winter or summer breaks that I’m used to, it was a lot more draining than I expected.

As tempting as the idea is to go back home, the ridiculously large price and even seemingly smaller time spent at home isn’t worth it. But, more than that, I’ve realized that I actually do enjoy spending these smaller breaks on campus. It’s weird at first, seeing most people head back home and it certainly brings up some thoughts of, “Wow, I wish I could go back home, too.” But, the breaks that I’ve spent on campus have actually created some of the best memories that I’ve at Swat, and this past fall break was no different.

After a week spent with people simply hanging on Swarthmore’s campus (whose beauty you 100% appreciate more when you have less stress), Philadelphia, or any of the cities nearby, you’re set to be great friends for the rest of your time at Swat. Fall break proved to be time too for me make new friends—who I’m now spending a lot of time with, as expected—and make even more memories with two people that I already love: my sister and my roommate. The places to be: Philadelphia and New York City.

East Coast transportation, in my opinion, is so much more convenient than it is in Southern California. We’re only a quick train ride away from Philadelphia (as you’ve probably heard so many times now), but the lesser known secret is this: Megabus tickets to New York are so cheap, sometimes as little as $18 round-trip! With lots of time to explore, getting around becomes only a matter of making sure you make it on time to your train and bus. 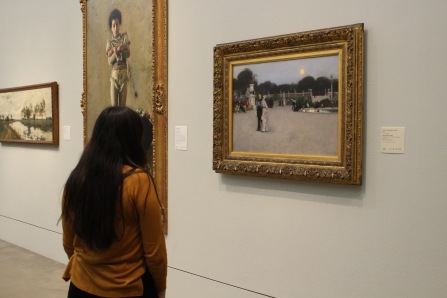 Make it into the city successfully though, and it’s yours to explore. It’s impossible to detail everything there is to do—cinemas, coffee shops, parks, famous landmarks—but this past fall break I focused on the art scene. At this point, I’ve been to the Philadelphia Museum of Art about three times and even then, I know I haven’t spent enough time there. The familiar works of Van Gogh and Claude Monet are there, but in addition to that, there’s always a new exhibition that revitalizes the experience (Mexican Modernism will soon be coming with works from Frida Kahlo and Diego Rivera).

New York offers it own array of museums: The Whitney, MOMA, and the Met. It was a bit overwhelming at first until I realized that there will be so many other opportunities for me to go to New York again and see what I want. It was fall break, and I wanted to leisurely take it all in. Rather than racing through everything, we only saw the Whitney and part of the Met. The rest of our two days in New York (I took the bus over twice) was spent indulging in pizza, walking the High Line, and enjoying the public performances at Central Park.

While I admit that it’d always be nice to see my parents more often, fall break is much more enjoyable on the East Coast than back home. The leaves begin to display their bright yellows and deep reds, and sweater weather comes around with autumn drinks readily available at all coffee shops. It’s a change of pace from the usual Swarthmore grind and one of the most unique opportunities to spend time with people doing a bit of everything.

Brandon is a prospective special major in English and Education, with hopeful plans to eventually share his passion for these subjects with both high school and middle school students. Though he dreams of publishing a novel one day, he spends a considerable amount of his time fantasizing about being a novelist rather than well, actually writing. View all posts by brandontorres714