I have long worshiped at the altar of William Shakespeare, god among mortals. I arrived at Swarthmore as a freshman clutching the Norton edition of his collected works, have performed with the campus Shakespeare troupe since my first semester, and named all my dorm room plants after characters from Hamlet. This summer, I’m taking another level in Shakespeare geekery: I’m currently on a grant from Swarthmore to study Shakespearean performance at the London Academy of Music and Dramatic Art. For weeks now, I wake up every day to parse verse (I am now intimately familiar with dactyls), learn Elizabethan court dances, and perfect my take on the Ophelia mad scene. I thought that this was peak Shakespeare, but I was mistaken: I had forgotten about our trip to Straford-Upon-Avon, aka Shakespeareland.

All of this would be a little tiring if the countryside wasn’t so damn beautiful, the plays weren’t so well done, and the cocktails tasty. And despite the fact that Stratford-Upon-Avon is the heart of the commodification of Shakespeare’s name and image (you can buy Shakespeare erasers, baseball caps, chocolates), there is quiet there, and truth. And it was there in Stratford, among all the paraphernalia, that I was finally confronted with Shakespeare the man.

I have never been comfortable with Shakespeare the man. It’s not an unusual hesitation: after all, there’s a rogue chunk of academia that’s on a wild quest to prove that Shakespeare didn’t actually write his plays, which is a much grander and puzzling discomfort than my own. For me, it’s not about whether Shakespeare was a pen name of Queen Elizabeth or the bastard son of so-and-so, it’s about the fact that his words have moved me, and I am loath to discover that my hero is less than what he seems on paper. Yet in Stratford, he became human to me, and I can’t say that I regret the transformation.

The shift happened our second day there, while we were touring Anne Hathaway’s cottage (Anne Hathaway being Shakespeare’s wife, and not the contemporary actress). Anne is best known for being possibly less than beloved by her famous husband: in his will, he left her their second best bed. However, as we huddled through the low-ceilinged rooms of her family home, our guide noted that this was likely not an insult at all. The best bed would have been kept for guests in a central room, while the second best bed would have been their marital bed. So though he did leave her a lumpy old mattress, it was the mattress upon which they had slept together for years, and conceived their children. In this light, I can’t help but think that the gesture has a Homeric quality; after all, it is likely that Shakespeare was familiar with the Odyssey, and the spousal bond between Odysseus and Penelope that is so beautifully explicated in their reunion over the marriage bed. And so the insult becomes a loving, possibly literary-tinged, bequest by the great man of letters.

Beds aside, the Hathaway property is gorgeous. Something in the air changes. Part of it is the particular magic of the English countryside, part of it is the gravity of history, but much of it is that indefinable peace that settles over particular parcels of this world of ours. Sitting in the apple orchard felt like a meditative exercise, and before I knew it, I had pulled out my notebook and began scrawling an idea for a new play. Pages filled, and as I wrote I half-wondered if Shakespeare had sat beneath these trees as well to scribble out a dream that desperately needed to come into being. For a moment, this impossible thought equalized us– two actors who turned to writing, sitting in the same orchard, scrawling out new ideas, centuries apart. And he became a man to me. It is likely that he did spend time in the orchard, playing with his future bride when he came with his father to buy goods from the Hathaway farm. It is possible they met here. It was here that Anne would retreat when the plague hit the countryside. For him, it was a haven. And for a moment, it was for me as well.

As we left the Hathaway Cottage and headed on to the other delights of Shakespeareland, I didn’t want to leave. I wanted to feed on the energy of this place, I wanted to dream more dreams and put them to the page. And I knew then that my reluctance to see Shakespeare as a mere man named Will stemmed from something deeper than a reluctance to see my hero fall from his pedestal: it stemmed instead from a fear of acknowledging the possibilities of the writer, from granting one human such literary might. For if he could create so broad and wild a canon of work, who was to say that he was alone in this ability? Each of us has a seed of brilliance within us. Each of us has a story to tell. And is it not an incredibly hopeful thing that one human already has succeeded so in putting the human experience on the stage?

There were other amusements in Shakespeareland, but I was half-stuck in my head for the rest of the trip, turning over my ideas. Only that night’s performance of Hamlet shook me from my trace. It was one of those shows that shake you down somewhere in your ribcage, make you forget you know the play, and gives you faith in the transformative power of theatre. And afterwards, we all decamped to the Dirty Duck (aka the Black Swan) the local pub where the actors of the RSC go to get sloshed and talk with fans after each performance. Clutching a Pimms cup, I chatted with Natalie Simpson, the company’s Ophelia, about the role and the intricacies of relationships between artists. It was one of those nights that I hardly dared dream about when I was younger, stuck in suburbia with my nose in a book. But somehow, as I woke the next morning and we hauled out and back to London, it wasn’t the glitter of my night at the Dirty Duck that stuck with me: it was my time in the orchard wrestling with Shakespeare’s ghost. 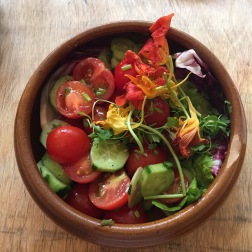 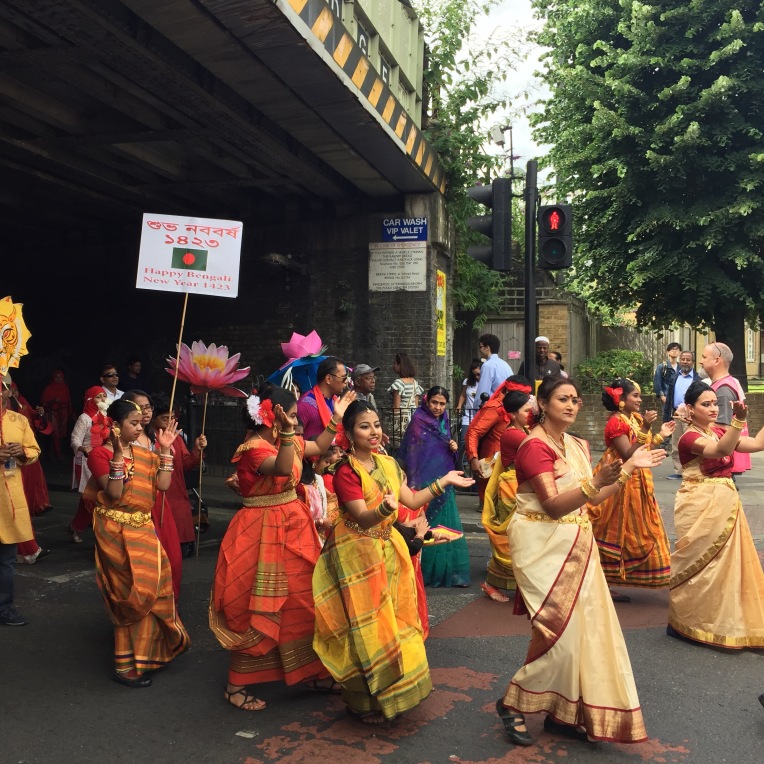 And as I was thrown back into the colorful work of London (the pictures above are from the Columbia Road Flower Market, Shakespeare’s Globe, Hackney City Farm, and a Bengali parade in Whitechapel), I felt that I had taken the calm of the orchard back with me. A few days ago, as I was buying a Caryl Churchill play at the Royal Court Theatre’s bookstore, the man behind the desk told me I looked like I worked in theatre, and asked me what I did. I told him I was a playwright. As I said it, I realized that that moment was the first time I had called myself a playwright out loud. I’d always said I was an actor who just happened to write, or if pressed: “well, I sometimes write things.” The man smiled, shook my hand, and introduced himself. He was a playwright as well, working on a piece called Wine Over Clementine. Would I like to read it? He would love some notes. When I left the Royal Court and got on the tube clutching several free plays he’d pressed upon me, I felt that I had stepped into a world as magical as it would be challenging. I had taken on the mantle of the playwright, and I was both ready to faint and to write something world-shaking, and also sort of ready to eat dinner because I was fairly starved.

To be honest, I have much preferred London to Shakespeareland. I love wandering through Brick Lane on Sundays when the streets are crowded and you can buy every sort of street food under the sun, I love The King’s Head (which is both a theatre and a pub, all of my favorite things in one), I love the rich and luminous smell that floats out the doors of the row of Vietnamese restaurants that line the streets as you walk from Dalston to Shoreditch. But it was in Shakespeareland that I gained the audacity to reach for the same lofty aim as Shakespeare himself: to write of the sheer idiocy and majesty of the human spirit on an epic scale.

My grant was supposed to help me become a stronger actor, but instead I have found myself in the strange situation of finding my own voice in creation instead of performance. All I can offer in explanation is that travel does not change us, experience does. Experience opens up possibilities, new cultures, new worlds. The vulnerable parts of us emerge, and in our separation from our usual world we are isolated with our hopes and fears. I’m about to return to Swat as a senior, which has for months seemed reason for existential panic and angst. But now I feel that I know where I am going: I will write the play I began in the orchard. I will stage it. And after? Who know what comes next. That’s another journey, and I look forwards to the discoveries of the road ahead.

I am thinking often of what Tennessee Williams wrote: “Make voyages. Attempt them. There is nothing else.” Before this summer, I used to believe wholeheartedly in these words, but in the most literal fashion. Having finally traveled and made my first great voyage, I can say with authority that every step at Swarthmore has been a voyage unto itself. And to be honest, I am almost just as excited to come back for my last year as I was to come over to London. So here I come, Swat. I’m coming home for the last time, and it’s time for our greatest adventure yet.

Alessandra is a senior with an Honors Major in English Literature and Honors Minor in Classical Studies. While not sprawled across her dorm room floor studying, you can find her frantically making theater, working on the English department's Liaison Committee, and impersonating Lord Byron. She's a California kid originally, but Philly is starting to feel like home (so much so that if you ask her about her passion for the running path by the Schuylkill River, you've hopefully already cleared your afternoon). View all posts by Alessandra Occhiolini